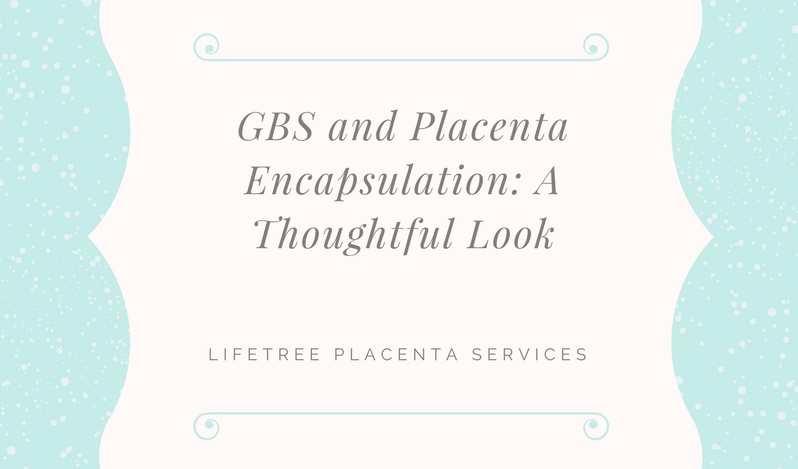 Recently, there have been many news articles published after a report was posted about GBS and placenta encapsulation by the Centers for Disease Control and Prevention (CDC).   Unfortunately, some of the content of these articles has been sensationalized and is not factual, causing fear among new mothers and the birth community.  The original CDC report can be viewed here.1  I would like to take time to discuss some thoughts about the content of the report and what it may or may not mean in regards to placenta encapsulation safety for clients.

Let’s start with some information about GBS. Group B Streptococcus (GBS) is a type of bacteria that lives within the digestive system of many humans as well as some animals.  It can be transmitted from contaminated humans, surfaces, and food sources. Research has shown that up to 38% of adult populations are colonized.2  While generally it’s not harmful to most humans, it can cause severe infections, most commonly among those with weakened immune systems. In the United States, GBS testing is conducted during pregnancy to see “how much” of this bacterium is present within the birth canal of the mother.  A mother is said to be GBS+ when the number of bacteria have reached or surpassed a certain threshold, the mother is then said to be colonized.  GBS colonization is not considered harmful and colonization is not the same as GBS infection.  If a baby contracts GBS from its mother and its threshold reaches a certain level, the baby is considered colonized.  Again, according to the CDC most colonized babies stay healthy3 and risks do not arise unless a GBS infection develops.  If a GBS infection develops in a newborn it can be dangerous and for this reason mothers who test positive are advised to receive antibiotics during labor to potentially lessen the amount of GBS bacteria present in the birth canal at the time of birth.  Since this is a bacterium that commonly lives within the body, the level can change prior to the birth resulting in unknowingly changing the status of the birth mother.

Now let’s take a deeper look at the available information in the CDC report.  First, it’s important to highlight that this report was not based on research but on a single case study with limited information and testing.  When tested at 37 weeks pregnant the mother showed negative for GBS colonization and then again when her breast milk was tested postpartum after the infection in her infant reoccurred.   It is possible that the mother’s levels changed prior to the birth as well as postpartum and she was the mode of transmission the baby.  With the reported testing conducted on the mother there was no evidence that the mother passed the bacteria to the newborn.  What does this mean?  The mother to baby transmission is unknown.   According to the CDC, “Late onset disease is sometimes due to passing of the bacteria from mother to newborn, but the bacteria may come from another source. For a baby whose mother does not test positive for group B strep bacteria, the source of infection for late-onset disease can be hard to figure out and is often unknown.”4  The report noted that other family members were not tested and cannot be ruled out.  Research found that “infants can catch “later” GBS infections from the hospital (nursery, hands of hospital staff and family members) or the community.”5  The CDC report also noted that the placenta capsules the mother was consuming tested positive for a near identical strain of GBS bacteria.  This was deemed the source of the infant’s reinfection although the mode of transfer to the infant was undiscovered given the breast milk was not shown to be carrying the bacteria.

What are a few other possibilities not considered in the report or tested for?  Re-infection of the infant could have occurred from the previous infection that was not fully cleared at completion of the first round of antibiotics.   One of the family members or other individuals in close contact with the infant may have been the source for re-infection of the infant and/or contamination of the placenta capsules.  Consuming the capsules did not alter the mothers GBS levels beyond the threshold to test positive for GBS in her breast milk and was not the source for reinfection.  With the CDC report information the overall picture seems to be full of unknowns and speculations.   Correlation does not equal causation, even when case numbers in a scientific research study are much higher than one single reported case with limited information and testing.

Consuming the Group B streptococcus bacterium either though human oral sexual contact, contact with contaminated surfaces, or foods that have been shown to carry the bacterium has not been previously reported to be risky and avoided, even to breastfeeding mothers.  According to the CDC, mothers who test positive for GBS are still advised to breastfeed their newborns, even though research has shown this bacterium is passed through breast milk.

Dr Genevieve Buser, an infection disease and pediatric specialist, and one of the treating physicians and lead authors for the CDC report itself shared with CNN during an interview, “Though the CDC report concludes that “placenta capsule ingestion should be avoided” and mother’s should be aware of the potential risk, Buser clarified she is not necessarily recommending against placenta encapsulation.”6

Even though the report leaves many unanswered questions, there is good news!  We do know that with proper temperatures during processing GBS can be effectively eradicated.  According to the Public Heath Agency of Canada streptococcus agalactiae (Group B streptococci) is inactivated after being exposed to moist heat of 131 degrees Fahrenheit for 30 minutes.7  The CDC report mentioned the company enlisted to create the mother’s placenta capsules may have used temperatures during processing as low as 115 degrees which would have not been high enough to eliminate the bacteria.  Dr. Sophia Johnson’s recent research at Jena University demonstrated that with safe appropriate temperatures and preparation methods, bacteria including streptococcus are eliminated or greatly reduced well below the threshold for food products by U.K. Standards.8

Let’s talk about what safety protocols LifeTree Placenta has in place to assure client safety.  All three methods of processing offered by LifeTree Placenta follow strict food safety guidelines reaching a minimum of 160 degrees Fahrenheit with dehydration timelines of a minimum of 10 hours.  This assures that potentially harmful bacteria contained within the placenta are eliminated.  In addition, all supplies at LifeTree Placenta uses during processing are disposable one-time use.  Equipment items that are reused are sanitized utilizing chemical sanitizing agents according to the standards set by OSHA for bloodborne pathogens to eliminate cross contamination concerns (more details about our supplies and equipment can be found on our website, as well as a list of past and current certifications including bloodborne pathogen and food safety).

With proper guidelines, handling, storage, and processing LifeTree Placenta is confident that mothers can safely choose placenta encapsulation services as part of their plans for postpartum support. We support the community of placenta providers dedicated to creating safe standards and suggest to all mothers seeking placenta encapsulation services to hire trained/certified professionals backed by organizations utilizing research-based education.  We welcome all questions and will gladly discuss any concerns with clients and professionals by reaching out in the manor that best suits their needs at the time, others can direct all inquires to info@lifetreeservices.com

What some medical and birth professionals are saying:

“This is a scare article. I was a bit surprised the CDC posted a single case report. Although interesting, the article does not support that the infant reacquired infection from the encapsulated placenta. I think the infant was unlucky and acquired both early-onset and late-onset GBS bacteremia from delivery.” -Pediatrician

“GBS is a normal bacteria found in the digestive tract and when ingested should not pose a threat to newborn breastfeeding – that only a newborn coming through the birth canal of a colonized mother MAY cause a baby to become sick. It’s a bit confusing as to why this would even be connected with ingestion of capsules, especially with the mother’s breast milk was not contaminated with GBS.” -Midwife

I am first and foremost a mother to two amazing children that fill my life with so much joy and love. I have them both to thank for all the passion that I have for my work. My heart is fully in my career and I pour so much love into my clients and get back so much in return. Read More…